The Sad Story of Brothers Jai and Veeru

It was May 2018 and we were in Ranthambhore’s Zone 6, a zone that features very unique topography including a rocky barren plateau area known as Kundal. A group of jeeps was concentrated in an area overlooking a ravine where we were told the area’s dominant male - one of the largest in the National Park - T-34 aka “Kumbha” was resting. But he wasn’t alone. One of his young male cubs - barely a sub-adult, and still under the care of their mother “Ladli” was also apparently with him. We couldn’t see either of them but after a while we heard a ferocious roar.

A short while later, on the other side of the ravine we saw a young tiger running for his life in the opposite direction. Scolded by his massive father and making a hasty exit from the scene. We did not get a close up of either brother on this visit but the next day I did get one of the brothers in a glorious habitat shot showcasing Zone 6’s unique landscape and topography. 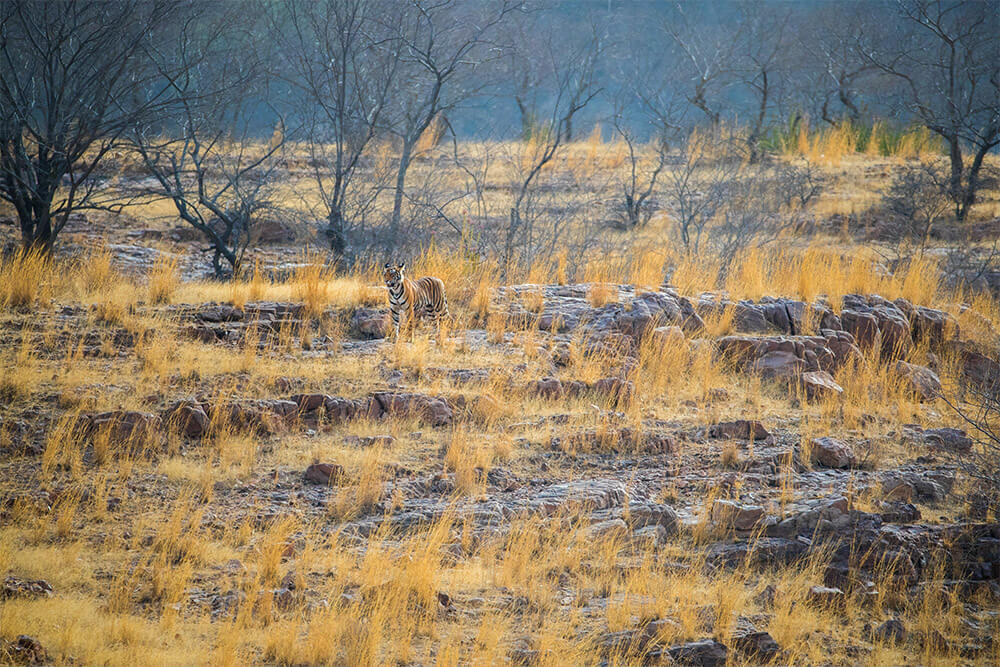 Fast forward to early January 2019 and now both brothers are sub-adults and have left the care of their mother. They have started to hunt but are still together - notable because it won’t be long before they go their separate ways as adult males, no longer friends but rather competitors - each seeking to stake out a territory of his own.

On this morning, in Zone 6 a large group of jeeps and canters are already congregated in an open area where the two young males are enjoying the last of a recent hunt - what appeared to be a small chital deer. In one of the more moving tiger scenes I have witnessed, one of the brothers appeared to embrace the other who was sitting. Their noses touched and I captured this scene on camera despite several obstacles - we were not well positioned given how late we had arrived at the scene.

We spent several hours a short while later with one of the brothers - Jai, who was clearly in a hunting mood and still quite hungry. As the temperatures rose we decided to bide our time watching him rest under a tree but occasionally look up as deer were in the vicinity. There was also a water hole immediately next to the area he was in. We witnessed him stalk and attempt to hunt sambar deer at this water hole in the early afternoon, only to get a thorn stuck in one of his paw pads. It might not have mattered as the sambar deer saw him and the hunt was over.

I was watching young tigers grow up right in front of my eyes and wondered how long it would be before the brothers would be forced out of this area by their much larger father. And when they would no longer be loving brothers but rather foes.

That time did arrive after my most recent visit to Ranthambhore in June 2019 - we were there right before the close of the park for the monsoon season. Both males were making their way out of Zone 6 at this point although they were still being occasionally sighted.

So it was with great sadness that I read (in October 2019) about one of the brothers - Veeru, getting into a ferocious territorial battle with a massive male named Fateh in Zone 10. Veeru was mortally wounded in this encounter and by the time the forest department found him several days later, he likely had several septic and infected wounds. The forest department did attempt to treat him but he succumbed to his injuries a few days later. The harsh realities of survival in the wild for these magnificent cats.

His brother Jai meanwhile was not faring much better in establishing a territory of his own. Pushed to the periphery of the park by the dominant males controlling the core forest areas, he was coming in to frequent contact with humans and villagers. In a tragedy, a young 10 year old boy perished as Jai ambushed him in the fields with his mother working nearby.

This story is unfinished and I do hope the forest department and conservation authorities recognIze that increased tiger contact with humans outside the park will result in more tragedies and is unavoidable given Ranthambhore is at capacity, i.e., it cannot support more adults given the land area. The solution in the near term is tigers like Jai need to be translocated to other tiger reserves like Sariska and Mukundra - where there is a prey base and much more available land for tigers to establish territories.

I hope the ending to Jai’s story is a better one than that of his brother Veeru.